[Sport] Take me out to the ball game... The MLB report 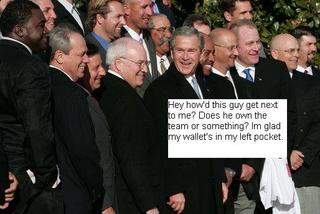 Okay now we really are getting to the business end of the regular season. Ive been spending the last few weeks sitting perched on the end of my seat watching as the teams battle for the (so few) places in the MLB playoffs and it really is going to come down to the wire. This wont be a long post. A lot of teams have been knocked out already so we’ll concentrate on who’s left.

Eliminated so far out of all play-off contention including wildcards are: , , , , , City.

Tampa Bay were never in it but have posted one of the best records since the all star break and have upset the Yanks and are now giving Boston a good ole thumpin. This race will come right down to the final weekend when host in a winner take all three game series. Right now the Yanks are only a ½ game back on the Sox and are enjoying a series against the Orioles, while the Sox are battling the upstart Devil Rays. In a perfect world, The Cleveland Indians (88-62) will keep winning, along with the Chicago White Sox (90-69) and will both qualify ahead of the (87-63) who will get caught and overtaken by the Yanks (86-63).

The Angels of Los Angeles (84-65) sit 1 1/2 games ahead of (83-67) and look a little too strong at this point and should come out on top of one of the most unpredictable AL West races in history.

The fight is definitely still on. Only four teams , , and have been ruled out of post season play. and are next closest to being eliminated and indeed their fate should be decided by Thursday. But the rest are fighting a very close battle for the wild card. The Cardinals (95-56) wrapped up the NL Central several days ago. And (85-65) are unlikely to be caught. San Diego (74-73) are rubbish but are unlikely to be run down by the Giants (69-80) though with Barry Bonds’ return the Bay area team are a totally different unit. Bonds hit 2 Home runs in his first four games, the guy is incredible. Houston (81-69) leads the battle for the NL wild card but the Phillies (80-70), Florida (79-71) and Washington (77-73) are all still in the hunt. My early season prediction was for to win the NL East. That failed but I’m confident they can perform an Ocean’s 11 and steal the wildcard prize from under the noses of the Phillies and Houston.

I’ll do a season write-up later, but following in the vein of recent postings, I’d just quickly like to say a big thanks to all those African-American, Latino, Hispanic, Dominican, Cuban and Asian players for really coming to the MLB party and supporting all those talented white guys. I can’t think of any of your names but I’m sure some of you are good enough to play at the same clubs as the likes of role-models Jason Giambi, Kenny Rogers and the plethora of other white stars. God bless .